Slightly sour, The Cultured Coconut’s exceptionally high concentration of live bacteria and yeast strains contribute to healthy gut flora. Organic coconut milk that has been handmade, offers the additional benefits of anti-bacterial, anti-viral and anti-fungal properties. Just one tablespoon daily provides over 4 trillion Colony Forming Units (CFU) of probiotic bacteria and over 40 active strains. Taken on its own, added to smoothies or over cereal. Beneficial for humans and pets alike. Nature’s finest probiotic that’s dairy-free, sugar-free, cholesterol-free and gluten-free. And of course, delicious!

Launched in May 2015 by Haligonians Linda Peers and her sister, Anne Hebb, The Cultured Coconut was born out of a desire to create a fermented, non-dairy probiotic that had the potential to make a significant difference in one’s health.

Being lactose-intolerant, Linda had tried a number of dairy alternatives over the years, but eventually settled on coconut milk. After doing further research though, she became concerned about the type of packaging in which they were sold, Tetra-Paks or aluminium cans. Bisphenol A (BPA), commonly used in the lining of canned coconut milk as well as food additives such as guar gum, carrageenan and sulphites, had been known to cause digestive issues. ?

As a result, they settled on making their own coconut milk using organic whole coconut from Mexico. The next step would be to ferment these simple, pure ingredient using traditional grains. The end result was a probiotic teeming with over 4 trillion Colony Forming Units (CFU) of probiotic bacteria and over 40 active strains, making it the most powerful probiotic on the market.

After taking months to develop, The Cultured Coconut was approved by the Nova Scotia Department of Agriculture, Food Safety Division. Every batch is made in a licensed kitchen in Bedford, and quality-tested to be below 4.6 pH, the mandatory minimum standard set by the NS Department of Agriculture. Each 500 mL bottle carries a Best Before label of 9 months from the bottling date, when kept refrigerated. Once opened, it should be consumed within 6-8 weeks. 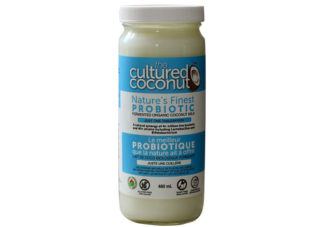